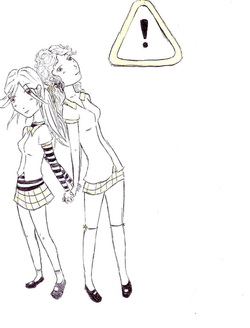 Summer, Inc. is a story I began to write in the summer between seventh and eighth grade. Basically, it was about a boy named Zac who gets forced by a girl named Summer to join her soon-to-be-club focused on making high school fun by hosting various events and all-around livening up the day. Looking back on it, it's a bit like Haruhi Suzumiya, which is weird because I don't think I'd watched that yet. Anyway, its short life was ended as soon as school rolled around, but I did end up writing a good eight chapters. This was my first major writing project since sixth grade.

And something I find pretty awesome- after writing the final chapter, I commented that although this story is ending I'd like to use Zac again someday because I liked him. I redrew him almost a year later and that drawing became the inspiration for the main character of Ambrosial.